A Liebherr L1-24 fast-erecting crane is being used to ensure the fastest possible rebuilding of a collapsed heritage wall on the island of Mainau. From the outset, special emphasis has been placed on ensuring that the island’s tourism trade won’t be affected.

Biberach/Riß (Germany) – The island of Mainau in Southern Germany is known as Lake Constance’s “flowering isle” and shares its stunning vegetation with visitors from all around the world. Amongst its many attractions, the island is home to Germany’s second-largest butterfly house and its world-famous rose garden. It is here that a 20-metre-long section of a historic wall suffered damage through ill-fated building work.

In order for the restoration to begin, all damaged pieces of wall have to be lifted separately and removed. The stone masonry and sculpture company Eduard Schnell decided on a Liebherr L1-24 fast-erecting crane to carry out this work. It is being provided by the Liebherr rental fleet based in the Upper Swabia – Lake Constance area. Markus Zeiler, Head of Gardens at Mainau GmbH, emphasises, “It was important to us that everything related to this project runs smoothly. We ensure that everything we do here on Mainau is absolutely environmentally responsible and doesn’t interfere with the visitor experience.” So, in addition to its technical specifications and reliability, the crane’s multi-award-winning design was also one of the criteria for choosing the L1-24.

A different kind of building site

In the run-up to the crane’s assembly, all those involved were made aware that conditions would be different from those on an average construction site. Before assembly began, the ground under where the crane was to be installed was assessed by the BfB-Büro für Baukonstruktionen in Karlsruhe, as the crane was to be positioned directly on top of the backfill of a historic rampart wall and useful information regarding the walls and their backfill wasn’t available. 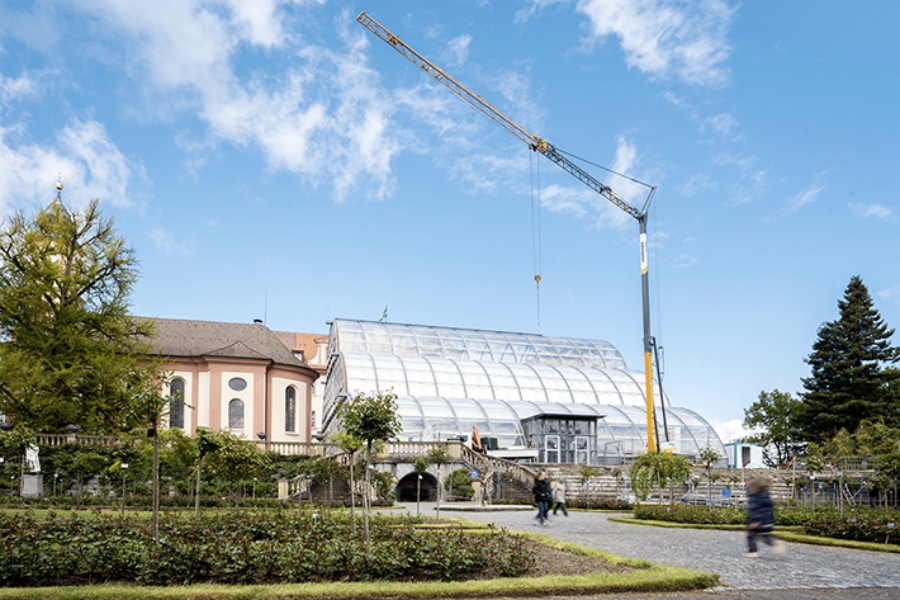 Access arrangements were also clarified in detail. The site can only be reached via a bridge, the weight limit of which is insufficient for a tractor vehicle towing ballast and the crane. On the day of assembly, the fast-erecting crane was transported over the bridge using one of Mainau’s own tractors, towed past the castle and then assembled by service technicians at the Liebherr site in Stockach. As the condition of the substrate couldn’t be specified with absolute certainty, the best possible precautionary measures were taken. Large-format steel plates were placed under the supports to keep the corner pressure points as minimal as possible. The crane was also positioned as far as possible from the collapsed section of wall.

As the island of Mainau is now open to the public again, additional safety measures were put in place regarding visitors. Liebherr’s sales and rental partner had an ABB operating range limiting system installed in the crane specifically for this purpose. Thanks to the fast-erecting crane’s state-of-the-art control system, this was programmed on site in no time at all. The ABB system prevents the crane from overshooting defined areas with its load. This means that the stone masonry company’s employees can go about their work knowing the safety of the island’s visitors is ensured.

It will be several months before the historic wall is restored to its former glory. Until then, the island of Mainau has an extra attraction – a L1-24 fast-erecting crane.