To protect roadways, structures, and other drivers on the road, there is a complex web of federal and state regulations that govern oversize loads. Complying with these laws and taking basic safety precautions is one way to ensure that the load gets to a job site safely, on time, and within budget.

What is an Oversize Truck Load?

Both federal and state law define the maximum size, height, length and weight that can be hauled on their road systems. Any combination of a vehicle and its load that exceeds these parameters may be defined as an oversized load, and will require a permit to be transported legally. In most cases, these loads cannot be broken down into smaller parts in order to fit within the specified dimensions. This may include things such as factory equipment, heavy machinery, storage tanks, wind turbine propellers, pre-built homes, pre-cast concrete piles, and other construction elements.

In the United States, interstate and other major highways (known as the national network) have travel lanes of 12 feet or more in width. To allow for a clearance of just under 2 feet on each side of the vehicle or load, the maximum legal width is 8.5 feet in every state. A load that is greater than 8.5 feet in width, such as a bulldozer with a 10 foot wide blade, is considered an oversized load.  Special permits are required to an oversized load, and specific safety procedures must be followed to transport a wide load of this type.

Excessive height and/or length may also lead to a load being deemed “oversized.”  Unlike length, there is not a universal standard for height and length. In most states, the height range ranges from 13.5 to 14.5 feet, while the legal length may be up to 75 feet in certain conditions.  If you are transporting a particularly high or long item, check with local regulations to determine if you need a permit to do so, or will be able to take other measures, such as marking an over-long load with safety flags.

Finally, both state and federal law define weight limits for transporting loads. On the national network, the gross vehicle weight limit is 80,000 pounds, with further restrictions based on the number of axles (20,000 for single axles and 34,000 for tandem axles) Importantly, not all overweight loads are oversized, as an overweight load may fit easily within a standard commercial motor vehicle. However, because overweight loads may damage highway structures and bridges, it is important to ensure that all laws and regulations are followed when transporting this type of load — particularly if it is also oversized.

The Federal Highway Administration (FHWA) administers the federal regulations that define size and weight standards on federal highways. These laws are designed to ensure that commercial motor vehicles are operated safely, and to protect the country’s highway system. However, the FHWA does not enforce the oversize and overweight standards on a day-to-day basis. Instead, each state handles enforcement of their laws related to oversize loads.

National vehicle size standards apply on the national network, which includes both the interstate highway system and federal highways that are capable of handling larger commercial motor vehicles. The national network is vast, covering more than 200,000 miles of highways. 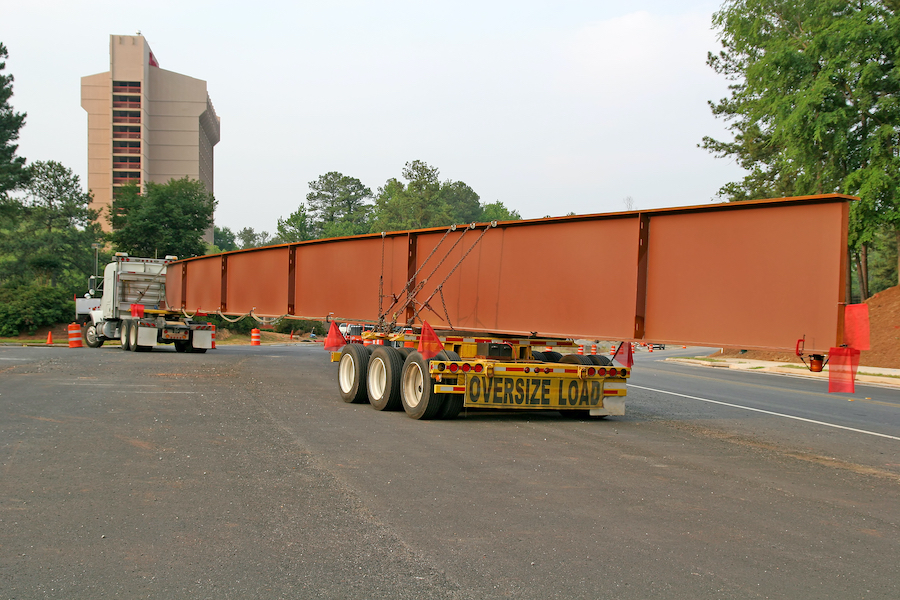 Each state has its own set of highway safety regulations, and is responsible for making sure that commercial motor vehicles comply with both state and federal law in this respect. Because many state roads cannot accommodate oversize loads, there are often specific limits for different types of roadways.  To ensure the safety of all on the road and to protect the integrity of the nation’s highways, states issue permits to transport oversize loads. These permits may specify the time of travel, weather conditions, and the safety equipment to be used. If the load will be transported across multiple states, then a separate permit for each state must be obtained.

When applying for a permit, transportation companies must demonstrate that the load can be moved both safely and legally from its point of oiling to its destination. This may require performing a route survey to make sure that there is not a contact hazard with bridges, overhead utility lines, overhead signs, and other structures. If a load is overweight in addition to being oversized, the operator must also demonstrate that the truck will not over stress bridges and overpasses, and that the weight is properly distributed across axels. It can take several weeks to apply for and be approved for these permits, so contractors and trucking companies should plan accordingly.

The Dangers of Oversize Loads

When hauling a load that is excessively long, wide, tall, or heavy, there are particular risks that truck drivers must be aware of to avoid an accident. This includes the possibility of deflated tires due to the weight of an oversize load. If a tire blows, the driver may lose control of the vehicle. In addition, trucks that are loaded with oversize loads may be more susceptible to rollover accidents, particularly when making sharp turns or speeding. In many instances, the weight and size of a heavy load can make it more difficult for the driver to control the speed and movement of the truck. The load itself places additional weight on the rear axle, while road contact with the front axle is reduced, making it harder to steer the vehicle. For these reasons, oversize and overweight trucks are a leading cause of truck accidents in the United States.

Consider a situation where a truck driver carrying heavy equipment on a flatbed fails to notice caution signs that warned of a low overpass ahead. If the over-height equipment hits the overpass, it may come off the trailer. This can lead to serious crashes if the equipment slams into other vehicles on the road. Even if the equipment doesn’t hit another vehicle, it could destroy the equipment itself, back up traffic, and create other problems.

Oversized loads that are not properly secured or that exceed federal, state or local limits may cause serious accidents. This may be caused by the load spilling, the truck jackknifing due to a sudden stop, or roll-overs. Given the size of commercial vehicles compared to passenger cars and trucks, these types of accidents may lead to catastrophic or even fatal injuries.

If you need to have a construction assembly, piece of heavy equipment or other large item transported, it is important to understand how to minimize the risks. Legal limits on oversize loads are in place for a reason. Following these laws can keep you out of trouble — legally and practically speaking.

As an initial matter, you should learn the limit for flatbed and other types of loads. While each state may have different requirements, generally, the maximum legal width and height is 8.5 feet, or 102 inches. The maximum legal length is usually 48 to 53 feet, while the maximum weight is often approximately 46,000 pounds (which are applied on a per-axle basis). Knowing the exact dimensions and weight of the shipment can ensure that the correct vehicle is chosen by the driver.

In many states, shipments over a certain width — usually 12 feet — require travel escorts o pilot vehicles. These escorts forewarn the drivers of potential hazards, such as construction ones, bridges, low wires, and accidents. They also alert the public to the presence of an oversized vehicle. If your particular shipment will require the use of escorts, be sure to budget for this cost, which may include hotels and other incidentals, depending on the length of the trip. Similarly, if special markings, such as red flags and amber lights, are required, you will want to ensure that the driver complies with the law.

There are often restrictions on when oversized loads can be on the road in many states.  This may include a prohibition on driving on nights, holidays, and weekends. Understanding these restrictions — along with the time it will take to get permits for each state — can help you better plan your transportation needs. When driving an oversized load, truck drivers are required to display a permit at all times, follow authorized routes, and drive within the permitted times. They should also take special precautions when driving, including maintaining a safe distance between vehicles, remaining within or below the posted speed limit, using extra caution when backing up, and paying full time and attention while driving.

While transporting heavy equipment and construction elements carries its own set of challenges, these issues can be managed through knowledge of and compliance with federal and state regulations. These laws may seem cumbersome, but following them and taking additional steps to ensure safety is the best way to mitigate the dangers associated with heavy loads.