Each job that requires a crane is a little bit different. Some simply come with greater demands than others. For example: tear down a four-track railway overpass and rebuild it in just a few days while train traffic is mostly maintained.

ALL Erection & Crane Rental, a member of the ALL Family of Companies, began its spring with such a project. The company was contracted by Norfolk Southern to perform reconstruction of a bridge over North Rocky River Drive in the Cleveland suburb of Berea. The bridge is home to four separate spans, each supporting one of the four rail tracks. Existing girders had to be removed from the spans and new steel girders had to be set.

Train traffic was able to be maintained because the track spans were done one at a time. This required planning, care, and patience because work on the bridge had to stop any time trains went through the work zone, and suspended material was moved well away from the tracks.

The work required a large, versatile crane, and ALL specified a 600-USt Liebherr LTM 1500-8.1 mobile crane. “Having the correct tool for the job is key,” said Mike LiPuma, sales and rental manager for ALL Erection & Crane Rental. “That’s why we chose the LTM 1500 for this job. It can handle both the tear-down of the old girders as well as the setting of new girders, with no need for dual picks. Plus, it performs reliably, time after time.” 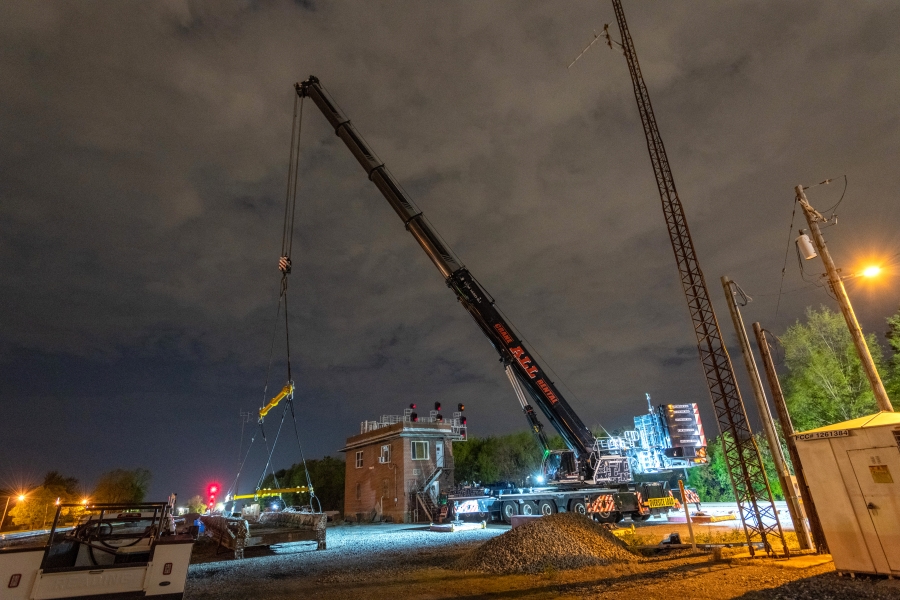 That reliability is a major factor because the crane had to perform in narrow windows when trains were not running on the adjacent track. LiPuma estimates anywhere from 25 to 35 trains passed by just between midnight and 7 a.m.

ALL and the rail line were in constant contact throughout the four days earmarked for the work. “There were fail-safes on top of fail-safes to assure the safety of the job,” said LiPuma. “Our guys had a train schedule, of course, but Norfolk Southern also notified us directly well ahead of each train’s arrival in the work zone. Then as an additional warning, train engineers sounded and sustained their horns on approach. There were never any problems.”

With the LTM 1500 positioned on the road below, just north of the bridge, the boom reached over the first three sets of tracks to remove the girders for the furthest, most southerly track span. As they were removed, girders were placed onto a rail car on one of the nearer tracks and delivered to a laydown yard located approximately one mile away.

Two of the heavier loads the LTM 1500 had to handle came during tear-down of the existing girders. One weighed in at 130,000 pounds and was picked at a lengthy 75-foot radius. Another weighed 170,000 pounds and was removed at the shorter radius of 55 feet. To accommodate these loads, the crane was configured with 363,800 pounds of counterweight. 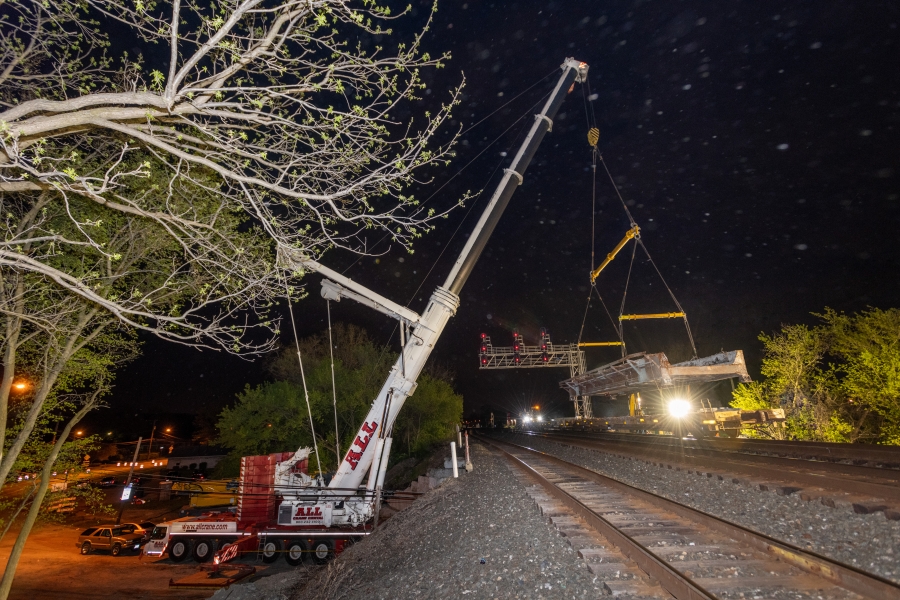 The crane was set up directly on North Rocky River Drive, requiring several days of near-total lane closures. Once the old girders were loaded onto train cars and moved to the laydown yard, ALL had a second crane at the yard tasked with removing the pieces so they could be pared down for scrap and hauled away. This second crane was also from Liebherr, a 500-USt LTM 1450-8.1.

After each track’s girders were removed, the LTM 1500-8.1 remained at the bridge and set the eight new steel girder end units. “The new steel girders were much lighter because they weren’t weighed down with embedded concrete,” said LiPuma. “The LTM 1500’s ability to handle those loads was important to getting the job done in the time allotted. And the farsighted planning reduced the time needed and the associative cost of setting up a third crane at the site.”

The ALL team ran two 12-hour shifts to complete the work within the window they were given. “It went off like clockwork,” said LiPuma.