The McIntosh Pit is a former uranium mine site that has undergone a multi-phase reclamation near Jeffrey City, Wyoming.

The former boomtown of Jeffrey City in Freemont County is located on Highway 287 about 90 miles west of Casper, Wyoming. The community experienced rapid population and economic growth in conjunction with the previously profitable and high-demand uranium mining industry during the Cold War era. As the local mining district attempted to meet the ever-growing demand for the radioactive element during the Cold War arms race with the Soviet Union, the focus was solely on political tensions, without a vision for the long-lasting environmental implications.

The USA identified a major concern in the 1950s about the access to the world’s small supply of known uranium, the main ingredient in the atomic bomb. A search for new domestic sources was initiated and identified the hills of Wyoming as a key potential location, which triggered a frenzy of prospector opportunity. Bob Adams, a Wyoming entrepreneur, became intrigued by the local stories of million-dollar claim fortunes and began his own quest. Adams creatively fixed radiation detectors to the wings of his private plane that could signal occurrences of uranium in the ground to successfully find uranium in Crooks Gap, where he staked his own claim and developed a business plan.

In 1958, the venture between prospector, Adams, and financing investor, Dr. Charles W. Jeffrey’s Western Nuclear Corporation (WNC) received a new contract from the U.S. Atomic Energy Commission that doubled its uranium milling capacity. This announcement sparked the boom of population growth and development of Jeffrey City, and the expansion of numerous uranium mines in the hills of Freemont County. Approximately 1,000 people were employed by the uranium mine. For 20 years the uranium mining boom continued, which allowed Jeffrey City to develop into a community with amenities where over 4,000 residents could live, work, and be entertained.

WNC began uranium mining operations at the McIntosh Pit in 1975 on Sheep Mountain. McIntosh Pit was a 35-acre area of the Crooks Gap-Green Mountain Uranium Mining District where over 4 million tonnes of ore had been extracted, to capitalize on sky-high uranium values. The corporation undertook large production open-pit mining operations and dug deep in the McIntosh Pit to extract valuable yellowcake; a mined uranium ore concentrate that the Split Rock uranium mill processed 1,700 tons daily. WNC used a variety of extraction methods including acid leach, solvent extraction, and ion exchange. Proof of the historical mining activities is seen in 2020, as the 200-foot-deep pit features a brilliant blue groundwater lake walled in by large, stepped banks cut into the rock measuring up to 300-feet high.

Unfortunately for Jeffrey City, the uranium mining bubble burst in 1979 with the partial meltdown of Three Mile Island, which triggered increased nuclear regulations, and led to an immediate drop in the demand for uranium given the perceived dangers of nuclear power. Subsequently, Western Nuclear Corporation laid off hundreds of employees to react to the changing economic conditions. By the end of 1982, WNC’s workforce dwindled down and production ceased. As was common practice at the time, the mine was abruptly abandoned, leaving the sporadic overburden landscape frozen in time. Since Jeffrey City relied heavily on the uranium mining industry, 95% of the community’s workforce population had vanished. Jeffrey City’s most recent US census data counted a total population of 58 individuals. 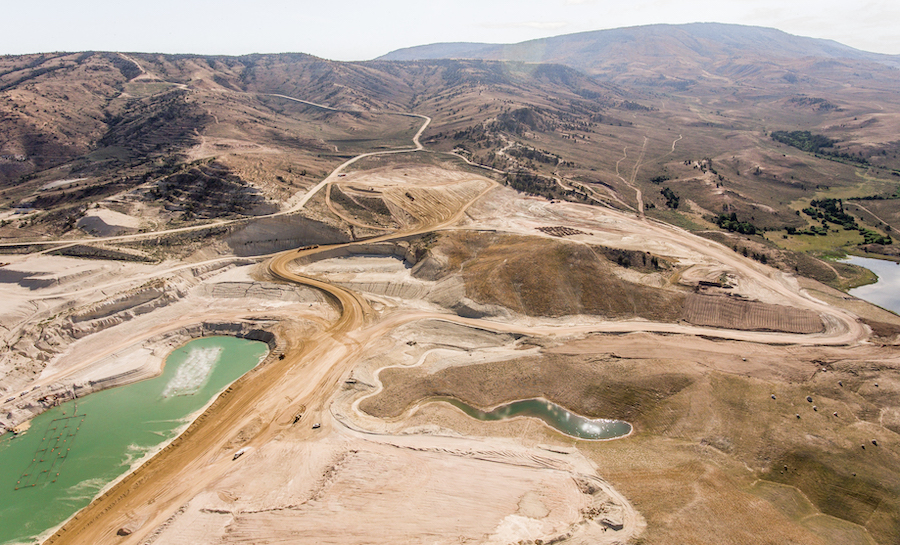 Reclamation on the Range

Before the adoption of the Surface Mining Control and Reclamation Act of 1977, the federal government did not require mining companies to perform site remediation work. Times have changed, as in today’s environmentally conscious society, there is a responsibility to rectify the oversights of previous mining activities. The federal government has designated funds devoted to the cleanup of these hazardous land areas disturbed by mineral extraction. Wyoming is one of the leading states in cleaning up abandoned sites. Commencing in 2014, the Abandoned Mine Land (AML) Program administered by the Wyoming Department of Environmental Quality (DEQ) laid out an estimated $26.2M, multi-year plan with 7 project phases to reclaim the McIntosh Pit back to the original landscape, prior to uranium mining operations. Computer generated 3D models were created to ensure the land transformed back to the pre-mining vista. The goals of the program were abating physically dangerous hazards, improving drainage and site conditions to stable landforms, remediating 12 million cubic yards of mine spoils containing elevated radionuclides, and promoting diverse vegetative success for livestock grazing acres. The 2020 phase 5 of the Mcintosh Pit project was to move a total of 1.2 million cubic yards from the hillside into the bottom of the pit, thereby eliminating the groundwater lake.

Since 2014 a variety of competitive-bidding contractors have been awarded the various phases of the AML McIntosh reclamation project. These contractors have chosen different methods of earthmoving equipment to complete their respective phases, ranging from mining shovels or excavators top-loading into trucks, and traditional motorized scrapers. The phase 5 contract was awarded to Summit Excavation & Grading in April 2020 who proposed a unique new method of excavation services to complete the challenging 8-month project before November. Summit targeted the average weekly production at an advantageous 50,000 cubic yards per week.

Summit utilized two Volvo 40-Ton Articulated Dump Trucks, each pulling two K-Tec scrapers in a train configuration on the long haul from the east spoil pile. Each scraper hauls 37 cubic yards for a total of 74 cubic yards in a single pass with a single operator and engine running. The K-Tec 1237ADT train scrapers easily loaded the abrasive powdered granite material with the aggressive center bit cutting edge stinger that allowed for deep excavation and speed loading. Summit used gravity to their advantage to dive over the spoil pile cliff’s steep grade; load the lead scraper first, followed by a heaped rear scraper before reaching the bottom of the slope. Impressive production was realized as it took less than 2 minutes to load up the 74 cubic yard capacity trains in the cut zone. Summit Excavation owner & manager, Mark Schmidt, feels that “due to their 14’ width and four-wide wheel arrangement, the scrapers are stable and not prone to tipping even cutting down slopes up to 3:1. The K-Tec’s have high ground clearance and can handle the steep gradient ramps at McIntosh.”

The loaded trains, which were fitted with 8-caliper disc brakes, sped down an 8% slope on Summit’s freshly constructed winding haul road. The haul road was maintained by a Case 620 Tractor that pulled a 20’ wide K-Tec land leveler to blade the path smooth from point A to B with frequent moisture assistance from a dust control water truck. Summit emphasized the value of a well-maintained haul road, as earthmoving efficiency and employee safety was of paramount project importance. On level ground, the loaded scraper trains traveled approximately 34 miles per hour.

Once the scrapers reached the bottom of the pit, the scrapers drove parallel to the shoreside of the groundwater lake and smoothly laid out a lift of the gritty material by dumping each scraper within 8 seconds. A D8 dozer then pushed the scraper dumps into the pit water to progressively squeeze out the water while the scrapers turned around at the rock wall to crawl back up the haul road. Full cycles of earthmoving performance clocked an average of 7.5 minutes.

The scrapers proved their worth in the rugged conditions where occasionally, the cutting edges encountered jarring boulders hidden below the sandy surface. An excavator would quickly move in to pluck out the massive rocks and dropped them into a Volvo A40G truck custom fitted with a K-Tec EJB 4X ejector body. Once the ejector body accumulated a full load of boulders, the truck would also travel down the winding haul road, and smoothly eject a load of chunky rocks out the back of the truck to splash into the groundwater lake. 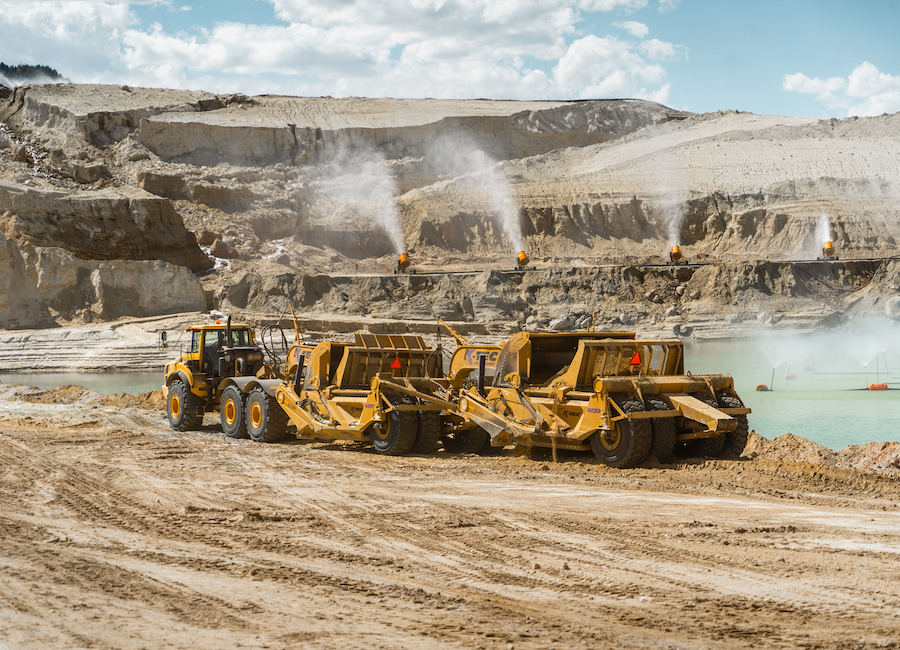 To safely eliminate the groundwater lake, as per the project specifications, a series of evaporation mist arrays and water cannons were positioned atop the water surface and around the reservoir banks. The evaporative dewatering system offset the displacement of the water level and prevented the level from being raised too rapidly.

Elsewhere on the McIntosh site, an Earthmoving Support Tractor (EST) was a wise investment for Summit to have readily available. The Case tractor power unit was fitted with 2 attachments from K-Tec as on the front of the EST, the Ox Block pusher block allowed for the option to push-load scrapers for increased capacity in an expedited cut zone time to improve productivity. On the rear of the EST, the K-Tec Tricerabox is a box blade mounted to the 3-point hitch, engineered to engage the ground and manipulate soil. The three functions of the Tricerabox include the leveling blade pulling material forward, ripper teeth sinking down into the soil, and blade backward for pushing material similar to a dozer. The Tricerabox has seven ground ripper shanks that are hydraulically operated to lower for engaging the ground to pre-rip the excavation to expose boulders. The Tricerabox back blade allows the operator to complete backfilling of soil work, fully smoothing out the cut and fill zones. The three-point hitch was also modified to have a scraper hitch hook-up, making it the ultimate piece of support equipment, where the tractor can fill in as a bulk dirt hauler for another power unit that may be down for maintenance.

Throughout the project, Summit strategically saved and stockpiled the topsoil while the subgrade was being reached. The topsoil was then hauled and spread either with scrapers or in some challenging locations, with the EJB. The technological prowess of the company shone as both the subgrade and finish grades were put in by GPS automated machines to meet the requirements of the 3D model original landscape. The final spreading of the brown topsoil above of the dusty Wyoming sand provided a fertile foundation for the landscaping subcontractor to plant native species. The plants took root to close the phase of the project, leaving future generations without a visible trace of the uranium boom and bust in these acres of Crooks Gap.

As the Cold War tensions slowly subsided in years gone by, the 7 phase AML initiative is now down the homestretch of closure. Summit Excavation successfully completed phase 5 of the McIntosh Pit uranium mine reclamation project on time by utilizing unique combinations of earthmoving equipment. Throughout the last 70 years, advantages continue to be sought after, for just as Bob Adams used creative equipment to originally find uranium in Crooks Gap, Summit Excavation used their own fleet of creative equipment to return the land back to the beautiful home on the range.