Watching a multi-story building in the middle of a city get demolished is quite dramatic. Many people enjoy watching all that concrete and steel tumble to the ground. But few know how it’s actually accomplished – other than the fact that explosives are involved in some way. In our Complete Guide to Demolition we explain the different ways to knock down a structure.

Why Are Buildings Demolished?

There are several reasons why a building is demolished. Structures may be dismantled because they have weak foundations, or they were constructed with hazardous materials. Sometimes the land is more valuable than the structure. Or a new structure is more useful to the surrounding community. Owners of very old buildings may determine that it’s cheaper to knock it down than repair it.

There are several ways to bring down a structure including implosion, high reach arm, wrecking ball, and selective demolition.

With implosion demolition, explosives are used to force the building to collapse down on itself from the inside out. This type of demolition is typically done in densely populated urban areas. Detailed structural blueprints are used to help the blaster crew identify where the main components of the structure are located.

This type of demolition requires a machine, such as an excavator, with an attached demolition arm or telescopic boom that is long enough to reach the top of taller structures. Various attachments may be used to break up the building. This could be a hammer, shears, or a crusher. The building is broken up from the top down. The machine is used to remove the largest pieces of the building. The demolition ground crew then breaks them up further. Finally, the crew sorts through the debris for disposal. 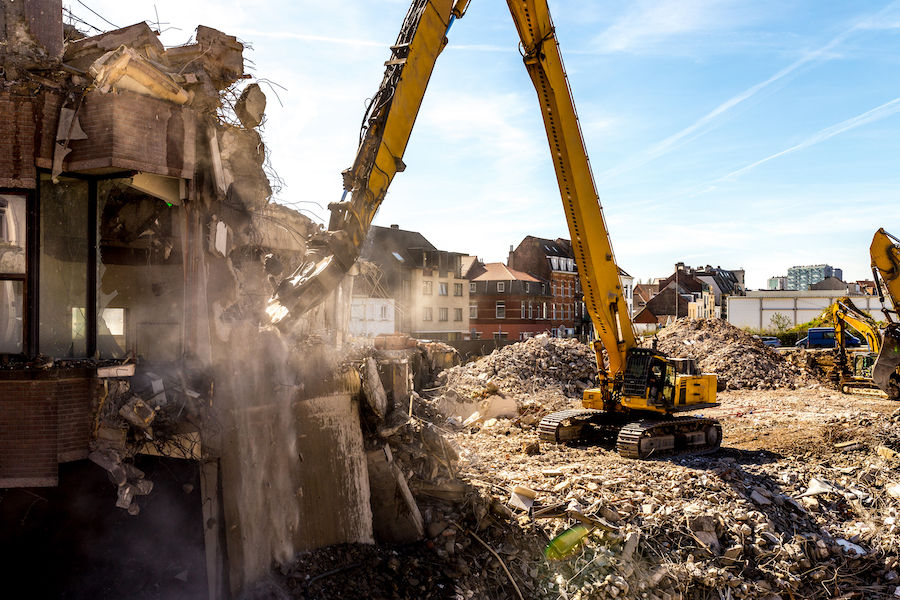 The term “wrecking ball” – as in such-and-such building escaped the wrecking ball – is used more than the actual wrecking ball method of demolition. It was very popular through the 1930s to 1960s. The ball – which can weigh upwards of nearly seven tons – is typically suspended from a crane by a cable. The operator either drops the ball on top of the structure or takes a swing at it. The building is crushed under the ball’s heavy weight. Unfortunately, wrecking balls cause a lot of dust. This is not the first choice when demolishing buildings that contain asbestos. It’s use is limited by the size of the crane. It requires swinging room that is not often available near power lines and other structures.

In order to properly plan for a demolition, details about the building must be gathered. Two kinds of surveying take place: building and structural.

The purpose of building surveying is to determine: 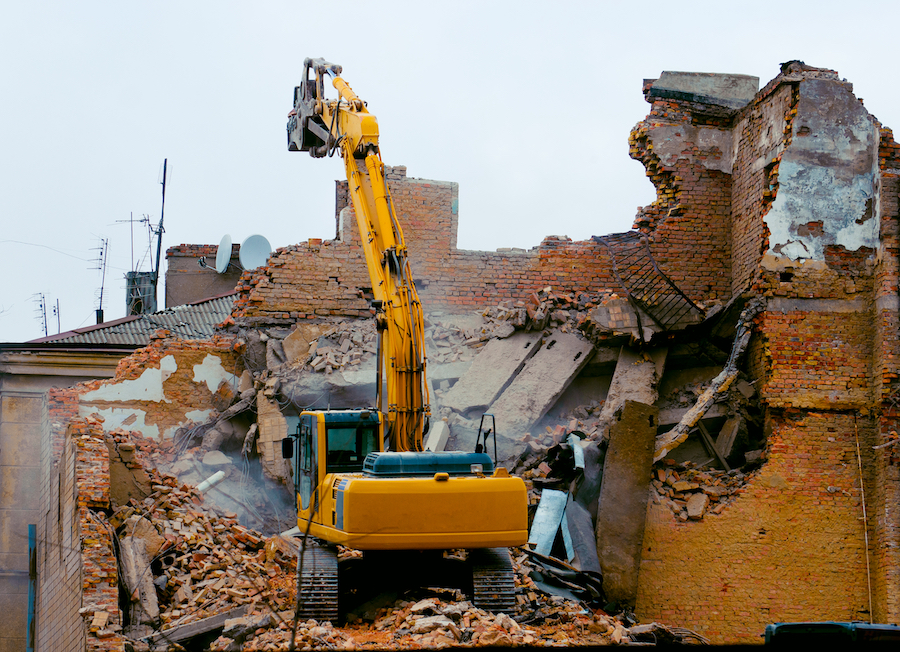 The purpose of structural surveying is to:

There’s more to getting a demolition permit than just heading down to the city building department and filling out an application. You will likely need to provide a detailed demolition plan. Other documentation may include an asbestos survey and, if required, certification for asbestos removal. You may need to provide documentation regarding the removal of exterior painted surfaces and dust suppression measures. In some cases you may need to agree that the demolition will be suspended if winds are blowing above a certain speed. Plans for how debris will be contained during demolition may also be required. Ultimately, you need to understand all the requirements for the demolition well in advance.

Preparing for a safe implosion demolition generally involves methods for cordoning off the site, controlling rubble and debris, setting up internal communications, implementing worker safety protocols, and installing a security team (such as hiring a security company and coordinating with local police) to protect the surrounding neighborhood.

What type of explosives to use and where to place them is very carefully planned. Dynamite is typically used for concrete supports and columns. Cyclotrimethylenetrinitramine, which is commonly known as RDX, is used to collapse steel columns. There are techniques used to control the collapse of the building. For example, installing pre-stressed steel cables into the walls. There are different types of explosives that are used and options for detonators. The explosives are placed in structural columns throughout the building.

The timing of the detonation is critical. The explosives installed are detonated less than a second apart. The goal in most implosive demolitions is for the highest point of the rubble to occur at the core of the collapse. A blasting cap is used to ignite the primary charge explosives. It is detonated from a safe distance using an electrical detonator connected to a lead line.

Now the demolition debris is removed. This is typically done with excavators and skid steer loaders that place the debris onto trucks. Material that can be reused or recycled are separated out either onsite or carted off to a recycling facility. Some recycling, such as concrete crushing, may be handled at the demolition site. Ultimately this is an opportunity to generate income and reduce waste disposal. Part of the cleanup plan may require a final clearance report prepared by an industrial hygienist.

Any demolition job is risky. But there’s no doubt that a tall building in the middle of a city is particularly risky. It takes a lot of skill, coordination, and know-how to pull off an implosion demolition. Here are two examples.

In the case of the Champlain Towers South in Surfside, Florida, part of the building had already collapsed, killing nearly 100 people. In order for rescue workers to safely continue their search, it was determined that the whole building needed to be demolished.

The 30-story Landmark Tower in Fort Worth, TX was built in 1957. It stood empty for 16 years and the decision was made to demolish via the implosion method. A perfect implosion demolition brought the tower down in 2006.

Smart demolition is making it safer to dismantle old structures. 3D modeling lets the demolition team test their plan before putting it into action. Robotics are handling the more dangerous aspects of demolition. They’re also improving the accuracy and speed at which demolished materials are recycled.

Husqvarna has a line of remote demolition robots. The DXR 140 can reach up 3.7 meters and reach forward 3.7 meters. It’s compact enough to step through a standard-sized doorway.

The Brokk 170 uses the SmartPower™ electrical system that can demolish concrete at near-silent levels. Attachments include breakers, crushers, and shears.

Many of the same skills that are in the construction industry are needed in demolition. You’re just tearing a structure down instead of building it up. The more specialized demolition jobs – where you are placing and detonating explosives – are typically on-the-job training or apprentice opportunities. Many demolition jobs require only a high school diploma or equivalency. Even though robotics is gaining popularity in demolition, a human must operate the controls.