Munich, Germany – Right in the heart of the Bavarian state capital, in the district of Lehel, you can see the historical symbol of the St. Anna Catholic parish church from a distance. This building, constructed in the neo-Romanesque style, is at the center of the eponymous St. Anna Square and is located directly across from the St. Anna abbey church. Between the two churches is a residential building from the 1950s that is to be removed from the city landscape due to its very poor structural condition. Bauer Umwelt, the environmental division of BAUER Resources GmbH, was tasked with the demolition, excavation pit construction and dewatering. 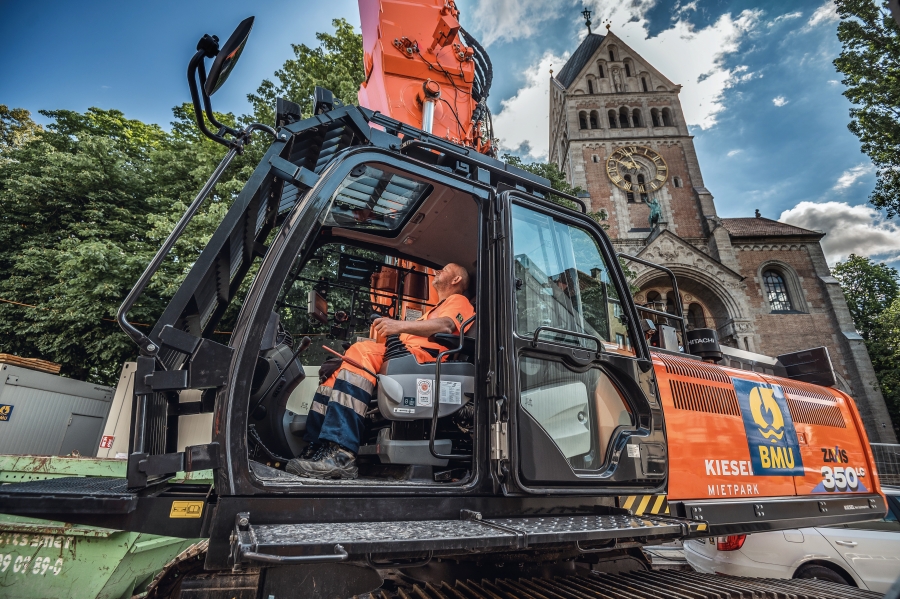 Over just five weeks, Operations Manager Jan Uhlig and his team prepared for the impending demolition on the 230 m2 site, completely gutting the four-story building and removing contaminants such as asbestos, SVF and PCB. In a nighttime operation in early July, the demolition excavator, a Hitachi ZX350 Longfront, was brought in to start with the demolition and removal of the roof truss. For a week, the excavator worked carefully and precisely from floor to floor and generated roughly 3000 t of demolition material in the process. It might sound easy, but this was generally laborious work for machine operator Heiko Gruschwitz, since there was hardly any space to move the Longfront excavator, which weighs 44 t and has an arm length of 24 m. Removal of the demolition material also posed a logistical challenge due to the narrow streets in the old city center. “Every movement has to be correct; you need to plan precisely when to carry out which steps,” says Erwin Resch, senior foreman in the Bauer Umwelt Division, speaking from many years of experience with similar projects. Not to mention that the area around the construction site is busy: Church services in the surrounding churches, a food bank run by the monastery and a weekly farmers’ market – all in the immediate vicinity. Out of respect for residents, demolition was paused for two hours each day around midday.

Here is the project video.

Other strict precautions were taken to protect the neighbors and the surrounding buildings by minimizing disturbances caused by noise and emissions. “In part, this was possible because the building was demolished from the outside in,” explains Operations Manager Jan Uhlig from the Bauer Umwelt Division. Where it was impossible to maintain a safe distance from the adjacent buildings, for example, a demolition curtain was used. The Bauer Umwelt team used water cannons to minimize the production of dust. “Good preparation and a cautious and neighbor-friendly approach were immensely important both for us and for the builder-owner. Rather, it was even an integral part of the award procedure and ultimately also decisive for our commissioning”, stresses Erwin Resch and adds: “The demolition of a four-story building in the tightest of spaces is not an easy matter.” 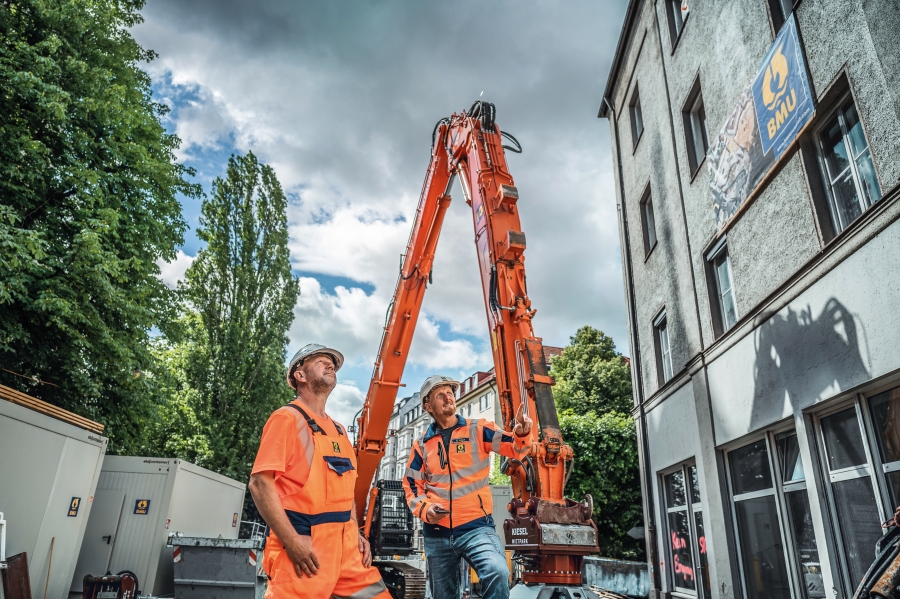 And that’s not all: Because the groundwater in this area is very high, the excavation pit to be constructed after the demolition must be completely secured by the experts from BAUER Spezialtiefbau GmbH. This is the only way to guarantee stability and impermeability to water. For this purpose, 800 m2 of secant pile wall and 400 m3 of HDI underpinning will be installed deep in the ground. After this, the 1,600 m3 excavation pit can be completed. “If everything goes according to plan, and we are assuming it will, we will conclude the project on schedule by the end of the year despite all the challenges involved,” states Jan Uhlig confidently.