What would you do with an arsenal of Eterra Attachments at your command? With just a few versatile attachments the possibilities become nearly endless, limited only to the extent of your imagination. One man’s vision was to create his own solar farm in Bellingham, Washington.

Thomas Trebacz is an Electrical Engineer working at Western Washington University. He moved to Bellingham 7 years ago with his wife where they started a family and began to look for a place to raise their two kids. About their property Thomas said, “It could easily accommodate a solar array…and this is one of the key reasons why we’ve chosen to purchase this land and to go ahead with the project”.

Creating a solar farm of this size (60 panels) is a big project, and some may ask why somebody would go to all the trouble in the first place. Thomas explained that the primary motivation was financial, as the return on investment is likely to pay off as the years go by. The size of the solar array makes it possible to actually generate more power than the family uses, the difference being fed back into the grid to be used by others. The excess energy is saved as credit to be used in the winter months when the solar panels are generating less than is required for the family’s needs. This means that the Trebacz’s may never have to pay another electric bill.


Thomas is not just in this for personal gain, however. He is also passionate about the environment, and freeing himself and his family from reliance on non-renewable energy is very important: “The most rewarding thing, by far, is the fact that we are not providing incentive to pollute. We are taking ourselves out of the picture.” It was evident from talking to him that Thomas cared deeply about his own sustainability as well as providing an example for others.

His background in electrical engineering helped Thomas tremendously in the construction of the system, which he designed and wired himself. He explained that this is the easy part of the project. “For an electrical engineer it’s not difficult to make the necessary design once the decisions are made. It’s just the burden of getting all the information you possibly can on the state of the technology in the market today, and trying to project also whether this is the right time to buy, in regards to whether there is an upcoming technology that could possibly be a game changer.”

After much research and consideration, Thomas landed on Seraphim panels made in the United States, and three SMA Sunny Boy inverters (Shown in above image). Inverters are required to convert the DC output into a utility frequency AC to be used or fed back into the grid.

He had it all planned out, but when it came time to start the physical construction of the array, there was some heavy lifting that would not have been so easy for Thomas to do by himself. 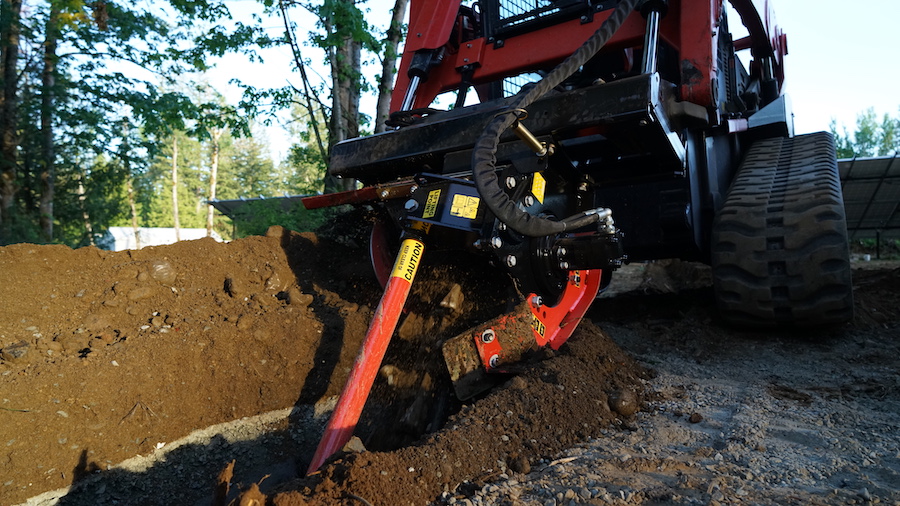 To move forward with the project he needed the site to be graded to level, 26 post holes dug for the supports of the array, and a 130 foot long 3 foot deep trench for the electrical lines. For this he enlisted the help of his friends at Skid Steer Solutions. Using a skid steer and 3 attachments from Eterra Attachments, they got the job done swiftly and effectively.

Thomas was impressed by the attachments efficiency and grateful for the help. “I couldn’t possibly be more satisfied. It was done right the first time and it didn’t take very long at all. Skid Steer Solutions was able to do the work perfectly and in such a timely fashion to allow things to proceed without slowing down.”

He went on to praise each attachment and credit them for making the project possible. “The thing that was really stark and amazing was that first step when everything was graded and we turned this into this pristine, perfectly flat landscape. That in and of itself changed the entire property.”

He added, “The [Auger] holes were perfect. They were done in the exact place where they needed to go.” 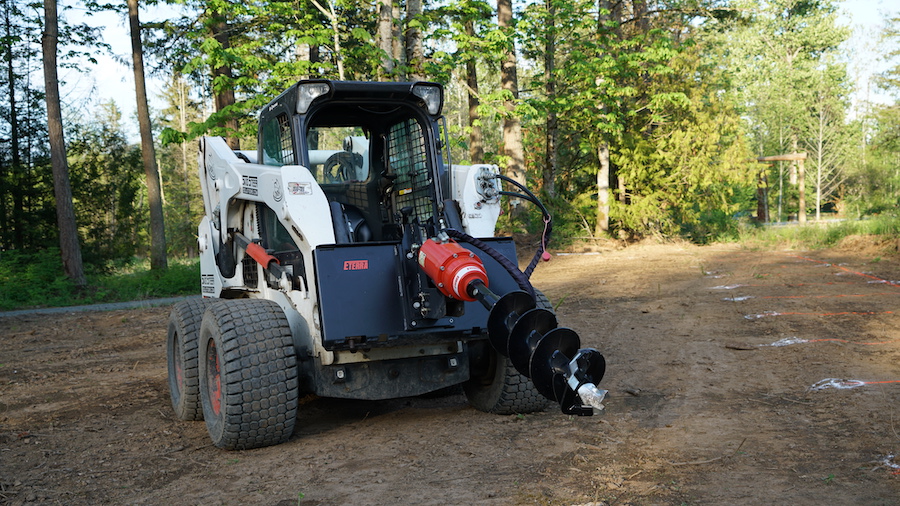 Thomas was especially relieved to have the help of the trencher. “If we had had to do it by hand, we would probably still be digging,” he said.

With the site ready to go, Thomas got to work putting up the solar array. First erecting the metal structure and filling the augered holes in with cement, then laying on the solar panels, and finally wiring the whole system. He was pleased with the way it turned out. “We got 60 panels and they all work within spec, perfectly, every single one. I anticipated that there would be some imperfections…but heck no, they are working identically.”

The array generates on average 120 kilowatt hours of energy on a sunny summer day, while the Trebacz’s only use between 6 and 12 kilowatt hours. This means they will be mostly feeding the grid during the summer. In the winter, however, they use 100 kilowatt hours for heating, lights, etc. and will be generating much less than that during the dark, rainy winter in Bellingham. Overall they will produce more than they consume, thanks to the size of the array and the efficiency of the system. 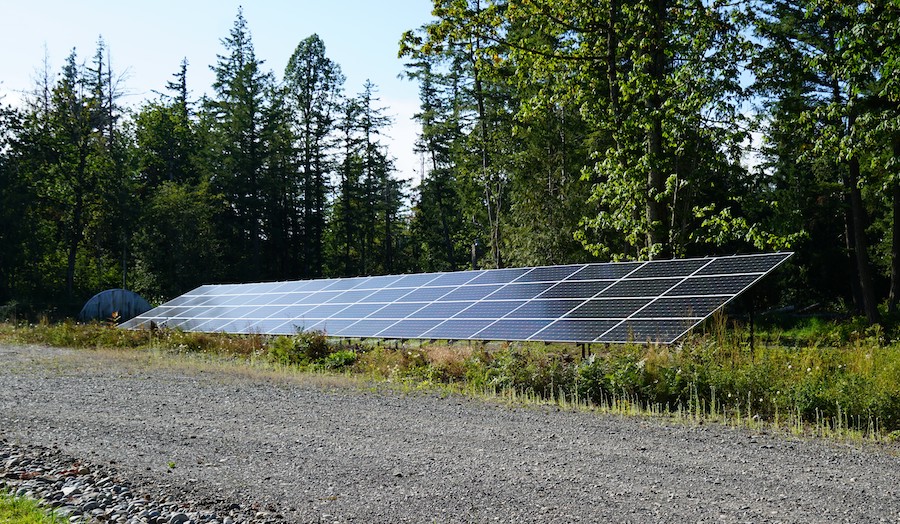 When asked about motivating others to follow in his footsteps, Thomas said, “I think getting the message out there that here is a successful project that essentially provides all the promises that most people want to have. Number one, autonomy, because now you’re in charge. Secondly, the price point such that you get the return on investment. And in the end, it isn’t likely to break down. These are products that come with 30 year guarantees.”

In conclusion he emphasized, “More people should do it, and it isn’t difficult, and with the right tools it certainly provides for a return on investment.”

This project is a demonstration of what is possible when motivated people get their hands on powerful, high quality tools. Thomas Trebacz had the vision, and Skid Steer Solutions helped him make his dream a reality. The price of a residential system is less than half of what it was in 2010, and dropping each year, making it easier than ever to achieve a positive return on investment. While these projects are becoming more economically viable, the state of our planet’s climate continues to worsen, making it harder and harder to answer the question, “Why not invest in solar energy?”

Ransome Attachments has inked a deal to distribute the U.K. based Gyru-Star Compact Screening Bucket in the United States. The company anticipates strong demand, especially from its landscaping, forestry, pipeline, and utility construction clients. “Many of […]

Erecting a Tower Crane Made Simple

May 1, 2021 Equipment & Contracting Cranes & Lifting Comments Off on Erecting a Tower Crane Made Simple

View the complete article here. In some cities, tower cranes have become part of the skyline. They seem to be everywhere – constructing high-rises and other tall structures. The mechanics of setting up a […]

Ransome Attachments has signed an agreement with UK-based Exac-One Ltd. to become the first distributor of the Grab-N-Drive Post Driver in the United States. The connection was forged through the Black Splitter, which both firms distribute […]